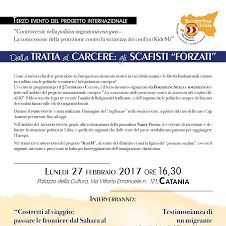 How can one ask for protection in Europe when the historical moment is witnessing fundamental freedoms and human rights enter into conflict with European security policies and legislation? February 27th will see the third event, held in Catania, by Borderline Sicily and borderline-europe in the remit of the transnational European project “The Granting of Protection Versus Border Security (KideM)”.

The three events are linked through an analysis of the figure of the trafficker, and of the impact of European policies of border closure on the lives of those undergoing forced migration.

The first event analysed the image of the “trafficker” in recent history, starting with the case of the Cap Anamur, down to today.

The second event, thanks to the witness accounts of the journalist Nancy Porsia, attempted to narrate and define the political situation in Libya, and that of migrants leaving from the country’s shores in order to reach Europe.

The third and final event of the “KideM” project will place the figure of the “alleged boat driver” at the centre, that is, the migrant arrested and put on trial in Italy, accused of aiding illegal immigration.

Giacomo Zandonini, journalist with an extended experience in Niger, “Forced to Travel: Crossing the Borders from the Sahara to the Mediterranean”;

A migrant arrested and then exonerated of the charge of aiding illegal immigration, who will provide his own account;

Open The Ports: We Demand the Safe and Immediate Landing of the ‘Nuestra Madre de Loreto’

Why The Proactiva Has Been Released. The Judge: “There Are No Safe Ports In Libya”.

In Flight from Libya: Who are the “presumed smugglers” really?