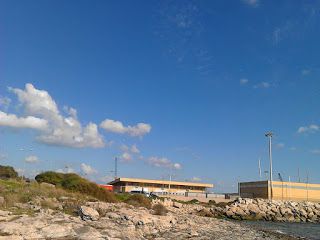 “What
Europe just doesn’t understand is that for migrants arriving in Libya
it’s less risky to try and escape across the sea that to try and go
back to their home countries”, says A., a young Senegalese man who
arrived in Italy two years ago. Like many of his countrymen, he’s
following the rescue operations on the TV, shot through with a sense
of momentary relief between the
powerlessness and rage. “Anyone who hasn’t been
in Libya cannot imagine what it means to live there. Every European
has a mobile, in the same way every Libyan, however old, walks around
with a gun in his hand. But no one in Italy wants to hear about
this.”

The merchant vessel OOC Jaguar at the port of Pozzallo. Photo: Lucia Borghi

In the
past few days the media has reported the news of the huge rescue
operations and arrivals: more than 13,000 migrants landed in a few
days on the coasts of Sicily, Calabria, Sardinia and Apuly, along
with the corpses of those who did not manage to finish the journey.
Very few words have been spent in asking why there has been such a
huge upturn in arrivals; there have, perhaps, been too many photos
and videos and a constant search for the most sensationalist news
which can be spread so as to record these dramatic moments, without
any appropriate respect for the privacy and suffering of others. In
general, the spotlights are switched off even before the migrants
have set foot on dry ground, to be switched on again with the next
instance of violence which can stir up public opinion. The elevated
number of rescues immediately carries us to a discussion of the
difficulty in managing the reception system: the new diplomatic
agreements, the increase in the brutality and detentions in Libya,
which has presumably blocked the departures till recently, is not
considered worthy of space in the daily papers.

And
thus it is that navy vessels, merchants ships and humanitarian
organisations have undertaken dozen upon dozen of rescue operations
in a few hours’ time. On August 24th
a new agreement was struck between the military mission Sophia and
the Libyan coast guard, projecting the training of the latter by
agents from the Eunavformed operation. This is the same Libyan coast
guard who have been attributed with the assault on MSF’s vessel the
Bourbon Argos, which took place on August 17th.
The attack was preceded by shots fired at standing height, and which
brought about a continuing stop to the ship’s rescue operation. The
agreement with the Libyan coast guard reflects the political will to
increase rejections and deportations, and the general strategy of
stopping migrants at the European borders, a strategy in which
European governments are engaged far more than any attempts to
provide protection to those who are fleeing.

This
political will has been confirmed by the EU Vice-Commissioner Frans
Timmermans who, on the occasion of yesterday’s meeting with the
citizens of Syracuse at the Greek amphitheatre, responded to various
questions about immigration by reaffirming that Europe’s challenge is
to “help them in their own countries”, protecting its own
borders, distinguishing between economic migrants and refugees, using
an iron fist against those African countries who do not accept the
agreements for readmission, and the impracticability of any
humanitarian corridors. The Vice-Commissioner also defended the
agreement with Erdogan’s Turkey. There was a great deal of rhetoric
about how wonderful the Italians are at welcoming, but not a single
concrete word about how to change the Dublin regulations, nor even a
reference to the total failure of the Hotspot and relocation system.
This is a Europe, in sum which for fear of giving too much ground to
the populist right, ends up assuming their positions, even if
mitigated by a less vulgar or openly racist tone.

At
Pozzallo there were two landings following one day after the other,
while only the night of August 30th
the English vessel “Fast Sentinel”, although originally directed
towards the Ragusan port, was redirected to Porto Empedocle with 300
migrants on board, because the situation at the Hotspot seemed
unsustainable. The condition of the dozens, if not hundreds, of
unaccompanied minors, both male and female, present in the Hotspot
for weeks is equally unsustainable. The lack of appropriate available
places is no justification for the violation of human rights and
arbitrary, illegitimate detention in a place which is entirely
inadequate, and without any appropriate separation between men and
women, adults and children.

We know
that often within the centre there aren’t even enough mattresses, and
the physical sleeping space and conditions of overcrowding have by
now become chronic with the new arrivals. Only a week ago we met some
young men who had run away from the Hotspot a week earlier, who were
aware that they needed to wait for available, appropriate places, but
not the fact that their presence in the centre had no legal basis,
above all for such a long period. “We have Italian lessons, clothes
and regular food in the centre. But waiting is too hard, it almost
makes you ill, even more so because we see other people are
transferred and we’re too many”, says A, from Gambia, who has been
acting as an impromptu translator, including for his friends from
Mali and Eritrea. “I know a lot of languages, I want to study and
here I’ve already learned some Italian words. My friends haven’t,
they haven’t even gone to school, which is why they can’t make
themselves understood.” A’s friends will still have to keep waiting
until the point when, one hopes, they will arrive in a place where
they can be more than just numbers and instead make themselves
understood and be known as human beings. But in the meantime the maps
of Italy and of Europe which these young men have received continue
to be sketched with a geography of voyages and dreams which remain
imaginary for whoever cannot move themselves freely, in which they
differ from their European peers.

The 473
migrants who arrived yesterday at Pozzallo have followed the same
process as the 692 who arrived less than 24 hours previously, among
whom there included 40 or so unaccompanied minors and around 20
pregnant women. The disembarking of the OOC Jaguar merchant vessel,
planned for 8am on Thursday, was delayed by 4 hours by the medical
checks undertaken by USMAF; it seems in fact that the merchant vessel
did not have any medical staff on board, and that it had not been
possible to undertake the routine checks immediately following the
rescues. There was a large deployment of police forces, along with
Frontex agents, members of EASO* and workers from the Red Cross, the
UNHCR*, IMO*, Save The Children, Terres Des Hommes, Emergency and
MEDU.

The
nationalities of the migrants present were varied and heterogeneous:
Gambia, Guinea and Mali, but also Bangladesh, Senegal, Egypt, Syria,
Somalia, Cameroon, Nigeria, Tunisia and Morocco, all having departed
from Libya like their companions from the day before. From the
Hotspot, the transferrals continue to Campania, Abruzzo, Molise and
the Central North, but last night a hundred people spent the night in
tents set up at the port by the department for Civil Protection.
Among them were women, children and Eritrean and Syrian families.
This is similar to Augusta, where around sixty minors were landed on
Wednesday and are still hosted in the tent-city at the port, along
with another 600 people. Yesterday, after the go ahead from the
doctors, the long descent under the beating midday sun began, the
refugees waiting in line for the photo, the scrupulous metal detector
checks, and the unending series of questions from the police and
Frontex agents, who are ever more active on the quayside. The landing
operations lead onto the removal of the witnesses and presumed boat
drivers/people smugglers, the alighting onto the buses and the
accompaniment to the area of the Hotspot, far from prying eyes.
Darkness and silence, all too frequently along with a lack of
protection for human rights, thus return to the migrants, who have
only just escaped from the jaws of death.

*MEDU:
Medici per I Diritti Umani – Doctors for Human Rights

The New Tent Structures At The Port of Palermo