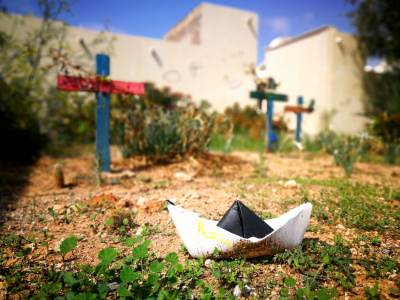 This year, another massacre at sea only a few miles from the island of Lampedusa reveals the inconsistency and hypocrisy of the festivities of October 3rd, occurring only a few days after the dismantling of the walkways for the invited politicians.

A massacre of women and children that does not even cause much sorrow, since the fake teardrops had already been shed during useless and sterile commemorative events. People keep dying these days, but these real facts do not provoke reactions, despite the stereotypical celebrations in memory of the victims of past shipwrecks.

Only a small part of civil society does not want to give up and keeps walking on a human path together with those who have experienced Libyan hell. This part denounces the perfect continuity of all governments to be the leader and responsible of all the deaths, in the desert as well as at sea. This explains why the latest Avvenire newspaper report on the Libyan human trafficker, who is guilty of crimes against humanity and sat at the same table with Italian authorities is so important: it sheds light on the direct responsibility of a policy which, in an attempt to wash its bloodstained hands at any cost, delegates the dirty work to others and transforms human traffickers into negotiating partners acting at institutional levels, walking freely around Italy, visiting the centres, bargaining how much money and arms Italy has to hand over to Libya. This proves and confirms what has been denounced for years by civil society.

While these are the modalities of the government’s border management, the functioning of the reception system continues to show, as always, huge downsides. Recently, tendering procedures for the management of extraordinary reception (CAS) have taken place in the Sicilian province.

In Palermo, the decision for awarding the management of the CAS is about to be taken. Yet, there are a number of circumstances which are unclear: the consortium Umana Solidarietà (engl. Human solidarity) and the cooperative Azione Sociale (engl. Social action) have been called to participate in auditing the awarding process as some of the proposals have been considered to be too low. Nobody showed up on behalf of Azione Sociale and this led to the cooperative’s exclusion from the tender. Paolo Ragusa, the regional manager of the consortium Umana Solidarietà and former president of Sol. Calatino, represented Umana Solidarietà. In the past, he had been publicly prosecuted by the prosecutor of Catania and charged with falsification and illegal bidding in a public concession contest from 2011 to 2014 for the reception center in Mineo.

Amongst the bidders are the cooperative Liberitutti from Turin and a new consortium (CSQ) of new and old cooperatives that have managed diverse centres in the Trapani area. Meanwhile, a few days ago, the cooperative leaders of the Azad-Elom centre communicated to the employees and residents that they would close. However, only a few days later things changed and now exactly the same cooperative is the winner of the tender. This is not the first time that fear of closure has spread and employees and residents are leaving the centre. It is a fact that there are fewer services available today in the centre compared to the past, as the responsible staff disappear and their vacancies remain vacant. According to witness statements from asylum seekers who are currently undergoing the administrative process, other centres have also announced their imminent closure (CAS Pozzo di Giacobbe and San Francesco, but also the CAS in Corleone and in Villafrati).

All over Sicily, except in Catania, due to the deadlock in Mineo and Enna, tenders are appearing, whereby a clear continuity to the past can be observed. Old cooperatives persist or simply change their name in order to change their appearance. The association Badia Grande has won the tender for the management of all the major centres: the detention centre (CPR) in Milo, the hotspots of Pozzallo, Lampedusa and Messina. The management of the detention centre (CPR) in Caltanissetta has been awarded to a temporary merger of companies consisting of Essequadro from Caltanissetta and Ad Majora. Only the prefectures of Trapani and Agrigento will not launch public tenders. Instead, they will renegotiate with the cooperatives that are currently managing the CAS and have shown interest in further work under new parameters.

All in all, not much is changing: the constant difficulties, very few controls, lack of specialized personnel. All this is leading to discomfort, neglect and flight. Today, people are made invisible one by one by providing merely board and lodging.

It’s futile to dismiss: the whole system is mapped out in order to make life difficult for those people who arrive and make them leave as soon as possible. If they do not die in Libya or at sea, we will take care of destroying their hopes and making them invisible slaves. And while we wait for official answers that break this deafening silence on an unpleasant truth, we will try to continue on our way, remembering who died and who continues to die today. We will continue to defend all the journalists who have the courage to carry out their profession as well as everybody else who is under attack, because they resist this mafia-like system.

Translated from Italian by Alma Freialdenhoven

Lampedusa once again in the midst of an immigration Emergency

Why The Proactiva Has Been Released. The Judge: “There Are No Safe Ports In Libya”.