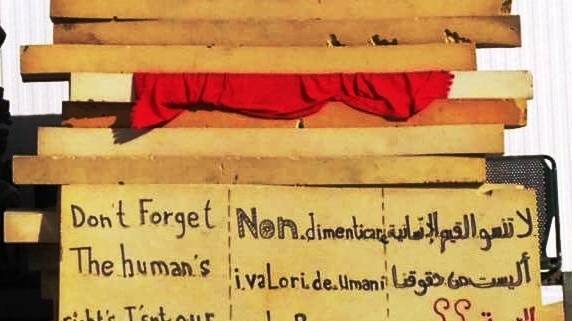 The Extraordinary Reception Center (CAS)* ‘Liberi Tutti’ in Partinico, in the province of Palermo, managed by the ‘Liberi Tutti’ cooperative, was eventually closed at the beginning of March following several inspections by the authorities.

We are not surprised by the closure of the center as we met three former residents of the CAS and listened to their testimonies describing conditions below the minimum standards set for the reception of asylum seekers and respect for rights, as well as human dignity.

The three people we met, whom we will call by their fictitious names Choukra, Mohammad and Rami were transferred to the CAS ‘Liberi Tutti’ in Partinico after spending two weeks on a GNV ship off Trapani for quarantine.

From their accounts, the circumstance that is most emphasized is the total disinterest and laxity on the part of the managing body. Their legitimate requests, such as to receive a first legal information, to have access to a doctor or a psychologist or to have an update on the status of their documents always received the same answer: later. Later, later, later.

The testimonies of former residents

A postponement ad infinitum that not only concerns access to the basic services to which these people are entitled, but also the conditions of the facility, according to the unison testimony of former residents. We were told that some of the windows in the beneficiaries’ rooms were broken and could therefore not be closed. Despite multiple reports to the managing body and the harsh climate of a mountainous area like Partinico during winter, the answer was always the same: later.

We were also told that the blankets were old, dirty and not very warm. Each person had only one blanket, even though they slept with the window open. Choukra tells us that because of these conditions he fell ill with a bad flu, for 20 days, during which he was not allowed to see a doctor, and the only medicine that was distributed to everyone as a cure for every ailment was paracetamol.

According to their testimonies also the hygienic conditions were very critical: sixteen beneficiaries had to share a single functioning bathroom, with one water heater. Choukra tells us that he often took a shower at 4 a.m., because every time a person took a shower they had to wait for four hours.

What also made the sanitary conditions worse was the failure to comply with the beneficiaries’ requests for new clothes: as usual, the answer was: later. Rami tells us of a time when workers brought him clothes that were dirty. There was a washing machine for which an appointment had to be made. Often people waited weeks before they could wash their clothes.

The quality of the food, when it was available, was acceptable, mainly because the beneficiaries cooked for themselves. However, there was often a lack of raw materials: Rami tells us that on the day we met him, he had not eaten because the fridge had been empty for two days, so he would have had to spend his meagre pocket money to feed himself. Breakfast in the centre consisted of two pieces of bread and milk. Milk was often missing. A worker we know who had the same experience in the same center comments, and emphasizes: “Two slices of bread? I am a human being, not a bird!”.

Concerning access to services, the three people we met and who had been in the centre for three months at that time, had not received any legal information from a legal worker since they had arrived at the center. In addition, they had not had access to a specialist doctor, despite the fact that Rami, for example, had serious health problems related to his experience as a soldier in his country: he suffers from eye problems due to his work done under the desert sun, and stomach problems that require a specialist visit. Choukra also tells us that he has worked illegally in the countryside several times, without any protection and at the risk of being exploited.

Regarding an inspection by the Prefecture, the three former guests told us that shortly before the visit, the managing body started to clean the rooms and repaint the walls. They told us that during the visit, the center manager’s attitude towards the guests was kind and helpful, unlike her usual attitude.

An emblematic episode of gross negligence, about which Choukra, Mohamed and Rami were able to observe the Prefecture’s displeasure, concerned an elderly Tunisian man. Despite pressure from the managing body, which ordered all guests to report to the Prefecture that ‘everything is OK’, the man said he had had a stroke and was not taken to hospital.

Choukra told us about another episode that also demonstrates the abuse of power by the manager: he had been vaccinated, but had never been given a Green Pass. At the request of the Prefecture, however, the manager magically materialised Choukra’s Green Pass. According to him, the managing body did not want him to have the certification so that he would not escape to the North of Italy, thus causing the loss of a guest and the related economic contribution.

The center for minors

In the same building, on the first floor, there is also a centre for minors, managed by the same cooperative. From the stories of the three former guests, it can be perceived that the level of promiscuity within the facility must have been very high, as they were convinced that there was no real division between the two communities.

The poor conditions of the CAS and the lack of access to basic services, leading to serious violations of asylum seekers’ rights, led to the closure of the CAS ‘Liberi Tutti’ after a series of inspections. The institutional decision is confirmed by the precise and concordant accounts that the three people we met gave us, after having been tired and exasperated for suffering a continuous series of violations and abuses.

At this point, it would be appropriate for this cooperative to stop managing any centre and to prevent the use of public funds to finance organisations that have no respect for the rights of the people they host and that totally lack professionalism and transparency.

Translated from Italian by Alexa Vittur

Visiting the CAS of Pergusa

We have lost even the last speck of humanity

Reception system, the new CAS* scattered between hills and mountains of the province. “Migrants increasingly lonely and isolated: this way they can be blackmailed”

Turn The Computer Off and The Brain On

Porta Felice: Exception Or The Rule?