Patrizia Maltese in Primo Piano
“Another shameful deportation and hurried collective expulsion indicative of the worst type of police state.”
This is how the Catania Anti-Racist Network defined the operation that took place in the night in Catania and which took the 53 adult migrants (3 of whom were Coptic Christians intending to claim asylum) back to Egypt from where they had escaped. The 52 minors who had arrived with them were instead accompanied to various reception centres in the area to await the decisions of the Juvenile Court. The Anti-Racist Network denounce the operation on two counts: firstly, for the slowness caused by the absence of interpreters and cultural mediators; and secondly, according to the Network, for the fact that representatives from the CIR (Italian Council for Refugees) and the UNHCR (United Nations High Council for Refugees) left after having been reassured by Digos that the following day, “it would be possible to provide the migrants with the necessary information to apply for asylum”.

The Anti-Racist Network, however, were far from convinced by these assurances. Their doubts were backed up by the fact that near the former gym (now uninhabitable) in Via Cordai where the migrants were being kept, two buses with a capacity for “over 100 passengers” had arrived. Nothing came of the sit-in staged by the Network, which saw them lie down in front of the buses and give the Egyptians information on their rights and the risks they were facing.
A statement issued by the Network spoke harshly about the police’s handling of the situation: “The Prefect of Catania and all members of the Police, Carabinieri and Finance Police are responsible for the suspension of the human rights (beginning with those on asylum, art.10 of the Constitution) of the migrants who had just arrived after having survived the increasingly frequent shipwrecks in the Mediterranean, caused by the criminal liberticide laws of the fort which is Europe. It is not possible for Rome to choose the country the migrants come from to suit the shameful repatriation agreements it has. Neither is it possible to try and hide its places of detention (which do not respect safety norms) or to deport migrants in the dark of the night to prevent them having access to the process of applying for asylum.”
The Network further denounced the fact that during their sit- in a gathering of local residents arrived, “some of whom were shady characters, who aggressively threatened some of us because they were annoyed that we were disturbing “their zone” (it is said that cocaine dealers operate only a few metres away)” yet such matters were not of interest to the police forces present. 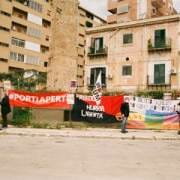 Immigration:152 migrants in the Province of Syracuse

Arrival of migrants in the port of Catania: all adults illegally deported back to Egypt

Associations call for the revocation of the anti-informal camp order