Reporting on the migration flows in Europe these
days turns into a war report. While it is discussed in the media all over the
world what terminology to use to describe the phenomenon (migrants or
refugees), the internet is overwhelmed with news of new tragedies that take
place not far away from Europe, trying to get closer and closer to the heart of
the so-called “old” continent that is closed like a “fortress”.

After the message that has shocked not only
Austria but the whole of Europe, more news of deaths came from the
Mediterranean. More than 100 migrants are said to have lost their lives on their
way to Europe. The number of victims is increasing day by day. According to the
UNHCR almost 2.500 people have been killed.

There were Syrian refugees in the lorry. Austria
gives more and more details about the discovery of the lorry where the bodies
of 71 migrants were found. The Austrian authorities have reported that the
bodies found in the cargo hold of the lorry parked at the motorway are likely
to be Syrian refugees according to some papers found on them. Among the victims
were 59 men, eight women and four children. According to the police, the cause
of death was asphyxiation. Furthermore, three people were arrested who reportedly
were involved in this case. “This tragedy underlines the ruthlessness of
the smugglers who expanded the radius of their activities from the Mediterranean
to the European motorways”, explains the UNHCR, “which proves that they
absolutely do not respect human life and seek only for profit and at the same
time shows the desperation of the people who seek protection and a new life in
Europe. It is to be hoped that this recent incident will lead to a strong
cooperation between European police forces, intelligence agencies and
international organizations to combat human trafficking and to protect and to
take better care of the victims”.

The Mediterranean Sea: Tragedy with no end in sight

At the Libyan coast the situation remains
dramatic. According to information from the Red Crescent, in the last hours two
boats full with migrants capsized not far from the Libyan coast, near Zuwara: approximately
about 450 people on board. 198 were rescued by lifeboats. Meanwhile, “The
Guardian” reports that about 200 people died. This message reached us
shortly after the coverage of another shipwreck in the Mediterranean. Only a
few days ago, the patrol boat of the Swedish Navy “Poseidon”, which
cooperates with the Triton operations, discovered the bodies of 52 migrants in
the hold of a boat. The bodies were taken to Palermo, together with 571 rescued
migrants. On August 15 a similar tragedy took place explains UNHCR. In the
cargo hold of a boat, the bodies of 49 people were found who likely died from toxic
fumes. And another tragedy on August 26: The UNHCR states that “an
inflatable boat with c. 145 people on board had problems. Some people fell into
the water and two men jumped after them to help. Panic broke out and people
begun to push; three women were crushed to death. 18 of the ones who fell into
the water could not be found, therefore, it is believed that they have drowned.
The survivors were rescued and brought to Lampedusa, and a 2 months old baby of
one of the deceased women. The majority of the survivors is in critical
condition and has signs of shock, injuries and bruises”. Correspondingly,
the number of victims rises to 300 people in the past four days, but the number
of tragedies, caused by the migration, on the sea and on the mainland seems to unfortunately
only increase even more.

The protests of the Libyans
against traffickers

After the Libyan Coast Guard discovered 200 corpses in front of the Libyan
city of Zuwara, it is said that several residents of the city went on the
streets to protest against human trafficking according to reports by “The
Guardian”. This demonstration is reminiscent of the discovered body of a
migrant dying at sea in summer 2014. The Italian online newspaper Redattore
Sociale reported about the place of incident which is still considered as one
of the most important links of trafficking in human beings to Europe.

Only with the coordination of all participants involved, the number of
people who are travelling to Europe can somehow be dealt with. “The
Mediterranean is, despite the efforts of Frontex operations, the most dangerous
route for migrants and refugees”, states the UNHCR. Many of the people, who
reach southern Europe and particularly Greece by sea, originate from countries
such as Syria, Iraq and Afghanistan where war and violence prevail. “All of
them need international protection and often they are physically exhausted and
mentally traumatized”. The UNHCR is asking the governments “to give coordinated
responses and that they act humanely and in accordance with their international
obligations”. Although the number of new arrivals is “overwhelming”
and some states are “overrun”, adds the High Commissioner, these
figures can only “be overcome with answers that are coordinated at
European level and by sharing the responsibility”. All European countries and
the European Union must act together to counter the growing state of emergency
and to demonstrate a sense of responsibility and solidarity “. 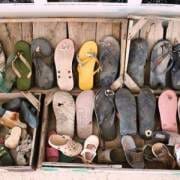 Western Sicily: A Week of Hell