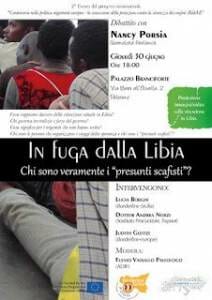 This is the second event in the international project “Controversies in
European migration politics – providing protection vs. border security” (KideM).

The European Community and Italy have made agreements with Libya for
years. Already in 2009, Berlusconi and Gaddafi, the former leader of the Libyan
regime, signed an agreement which promised the payment of millions of Euros in
compensation for Italian colonialism, while asking at the same time,
nevertheless, that Libya halt the “flow of migrants”.

In 2011, during the so-called “Arab Spring”, Gaddafi’s regime fell and,
along with it, also the wall set up to stop the flow of migrants. Today,
despite the fact that there is still no Libyan state, the EU is attempting to
establish agreements in order to stop those migrants who are leaving from the
African coastlines.

What do we really know of the current situation in Libya? Who is
governing it, between military and government forces?

How does this situation affect migrants?

Who are the people organising the voyages of hope and who are the
“presumed smugglers”?

We will discuss all of the above with NANCY PORSIA, an Italian freelance
journalist who lives and works in Libya. During the discussion images and
videos of the situation in Libya will be projected.

Nancy Porsia is a writer and documentary producer, and a specialist in
the Middle East and North Africa. She is currently working on politics,
security and “irregular” immigration in Libya.

Peoples’ Court To Be Held in Palermo. The Accusation: Crimes Against Migrants By the Italian Government and the EU

The Reception System in Agrigento, Trapani and Palermo: Between Disorganisation, Chaos and Abandonment

A Lack of Respect for Humanity

The endless massacres and the perfect line of continuity