The
arrivals are multiplying and the system, at the end of May, is already broken,
despite the numbers being no greater than at the same time last year. Many
continue to die, and many continue to arrive, saved from certain death, as we
have seen from the tragic images taken by the Italian navy.

Whoever
manages to be saved from this daily slaughter (200 dead and dozens missing in
only three days) is being sent to a Hotspot or one of the “non-places”
dispersed throughout Sicily. In the centre at Lampedusa, emptied out in recent
days in order to make space for new arrivals, a situation outside of any
regulation persists: there are men, women and children altogether, almost entirely
without discrimination, given that the men’s structure was burnt down, and
continues to be uninhabitable. But notwithstanding the conditions of the
complex, people continue to be disembarked on the island in numbers greater
than the maximum capacity. At present, with last Thursday’s arrival of 123
women, 18 minors and 20 men, the total number of migrants present is 333. Among
them are 15 Tunisians, detained separately from everyone else, who arrived in a
dinghy directly to the island. Beyond this there are also children, some of
them under 10 years old. Up until yesterday there was also a 9-month-old girl
on the island (who lost her mother in the crossing, a victim of Fortress
Europe), already the protagonist of a competition of solidarity, in which no one
will say who killed her mother!

The
situation is no different at Porto Empedocle where, after nearly a year, and
thanks to the disastrous situation at the Lampedusa Hotspot, there has been the
first landing of 2016, with around 540 migrants. They briefly passed through
the port’s tent structures, before being transferred to the hub at Villa
Sikania in Siculiana, where there are at least 600 at time of writing,
overcrowded and housed without discrimination. Among them are many women and
children, many of whom are Eritreans who arrived either only a little while ago
or have been there for months, awaiting the relocation process, which, needless
to say, does not work.

At the
landing at Porto Empedocle there was also a conspicuous number of North
Africans (most of whom originally from Morocco), transferred to the Agrigento
police station, most likely to receive a rejection notice, given that there are
few places left in the detention centres (CIE). The doors to invisibility and
exploitation are being opened up for them as well.

Today there
were again landings at Trapani, Catania, Pozzallo and Messina, with other
migrants to exploit and park up in some emergency centre, caught within a
failed system which at the beginning of Summer is already starting to tilt. 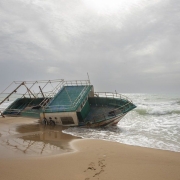 The African migrants who Italy accuses of people smuggling

When the TV cameras are turned off