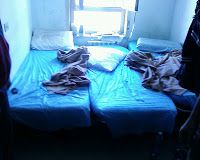 Six beds per room, mattresses on the floor. This is how the migrants in Salingrande live. There are minors of just a few years of age, who are left in the care of other residents in the absence of their own parents.

The inadequacy of the asylum seeker’s living conditions in Salinagrande can now be backed up with photos of the rooms as seen above. In a space of 10- 15 square metres, five or six people sleep. There are usually four camp beds plus two mattresses on the floor. One of the rooms in particular has been constantly flooded for the past six months, due to a burst pipe. Despite repeated complaints by the current occupants, every night two of the six must place their mattresses on the wet floor.

Another on-going complaint which dates back, and has been presented directly to the CARA (Hosting Centre for Asylum Seekers)’s manager without response, is the lack of hot water. Many of the residents say they have fallen ill due to the continual cold showers and the fact that the area of Salinagrande is characterised by natural exposure to winds. At the moment, there is a family who have been in hospital for several weeks, due to the illnesses of two of their three children. The two children were treated one after the other for severe cases of flu, which the residents directly attribute to the lack of hot water and the poor level of care provided by the Centre.

The consequences of this are that, given the fact that both parents accompanied the sick child to the hospital, the other two children stayed at the Centre. Children of just two to three years of age are left completely by themselves for the entire day. Fortunately, the other residents of the Centre look after them affectionately because there is no supervision provided by a social assistant or employee of the Centre.

This situation exemplifies the wantonness and the lack of care that characterises the way the CARA is run. The Centre is not divided up into separate areas for men, women and families. The rooms are all next to each other, so next to a room with five or six women, they may be a room with just as many men and then another with a family. This leads to nights within the Centre being anything but calm. Various asylum seekers have repeatedly drawn our attention to cases of alcoholism and even prostitution and the fact that any surveillance is completely inadequate.

The migrants also talk about an on-going argument within the CARA. Yet the only people to intervene and calm the situation down are the migrants themselves and not the employees or the two or three policeman who are on duty.

The cohesion, the solidarity and the precarious harmony which is created among the asylum seekers resident in Salinagrande are both spontaneous and subject to a fragile equilibrium, which is by no means helped by the way the CARA is run. For example, there are no communal areas in the Centre- there is not even a canteen. The place where food is served is just an aseptic, white room with no tables. The residents collect their meals, which are in sealed plastic tubs and take them back to be eaten in their rooms. Furthermore, it seems as if the food, which is provided by external caterers, if uncollected goes back to the supplier, even though it has been paid for. Next to the “canteen”, partitioned off with disposable sheets, is what should be a sacred place as well as being a communal area, the CARA’s mosque.

The asylum seekers also complain about the lack of adequate clothing. They show us threadbare garments and worn out shoes and tell us that new clothing rarely arrives and when it does it is already in poor condition. A resident shows us his back, which is covered in spots and tells us that the Centre’s doctor refuses to give him any treatment.

But why should they create communal spaces, provide treatments and services when once again all that we see corresponds to a logic of management perfectly in keeping with Cooperative’s winning contract of reducing costs? “Sleep and eat, sleep and eat,” is what all the residents bitterly repeat when we ask them about the quality of life in the Centre. And to us, it seems that even these basic needs are barely granted.

Unaccompanied minors at Pozzallo: for weeks inside the hotspot

Migrants being abandoned and CPA* under investigation

Who wants to close the CPA* at Pozzallo?

27 immigrants arrive in Pozzallo, all reported to be in good health

THE ARRIVAL OF BOATS IN LAMPEDUSA STARTS UP AGAIN, AS DO THE TRANSFERS TO POZZALLO