by Daniela Sammito, from Il Clandestino – Yvan Sagnet comes from Cameroon. In 2007 he came
to Italy to study, enrolling
at the Turin Politecnico. In the summer of 2011, in order to fund his
studies he went to work in Nardò (Puglia),
where seasonal workers are hired for the tomato harvest. He found work at the
Masseria di Boncuri and soon began to understand the inhumane living standards
and working conditions which the caporali
(black market bosses who take charge of the illegal hiring of manual workers,
often immigrants) subject their labourers to. Sagnet took part in the very
first independent strike to be organised by foreign farm labourers in Italy. We met
him in Vittoria
during a debate on “Territory and Rights”, which had been organised
by the trade union groups, CGIL, FLAI and the Social Cooperative, Proxima.

Yvan, you were one of the key figures in the
Nardò riots. Another event which received heavy media coverage, and also
concerned the problem of caporalato,
was the riots of Rosarno. Could you tell us, in your opinion, what the similarities
and differences are between these two incidents?

-In Rosarno, the rioting started after an
incident between an employer and a worker, then the entire world discovered
what was behind it all- the exploitation, slavery, infiltration of organised
crime. Yet in Nardò, the battle began as a response to the dimension of the
work and the unity of the workers. It was the case of a group of workers who
came together to lay claim to their rights. It was not a case of individuals,
as in Rosarno. That’s why there’s a notable difference also in the results of
the two strikes.

The results were far greater at Nardò and this
was due to the unity of the workers. We managed to get a law passed against the
caporalato. Businessmen and caporali were arrested. While what has
actually been achieved in Rosarno two or three years after the event? Very
little, apart from the fact that we still talk about it.

The introduction of caporalato as a crime was a great victory in 2011. How have things
changed as a result of this new legislation?

-It was an important result because after more
than 100 years of caporalato in this
country, the Nardò riots led to the recognition of this phenomenon as a crime
which damages workers.

Nonetheless, it is possible to complete this
law, which currently only punishes the caporali.
It is necessary to expand it so that employers (those who use the services of
the caporali) are also punished.
After all they carry the main responsibility. We knew if would not be possible
to obtain concrete results after just one year because the caporalto is a very complex phenomenon which is deeply rooted in
the area. It’s not that the introduction of criminal charges and a year of
fighting, will simply mean that all rights can be achieved. No, it is an
ongoing commitment of raising awareness of the situation. It is necessary to
approach the worker, offer them support and invite them to report what is
happening to them to the police, providing them with the necessary support to
do so.

It is a tough job which demands commitment and
in just a year it has been difficult to organise everything. There are still
many things yet to be done until the implementation of the law is effective.

What impression did you get of the living and
work conditions of the labourers in the Province of Ragusa?

-The conditions are exactly the same as
anywhere else in Italy.
There is very little difference between those working in Puglia-
in Rosarno or in Syracuse or Ragusa. It’s the same for everyone.
They are all underpaid. They
all sleep in abandoned houses. None of them have their rights respected. And
so the battle must continue.

In this period of profound economic crisis,
when we speak about immigration and integration issues, the easiest objection
to make is, “there isn’t enough work for the Italians, let alone
foreigners”. How would you, who have lived through the experience of
having your own rights denied, respond to such claims?

I don’t believe so much that there really is a
crisis, especially in agriculture. Because there is always demand. We all
consume, every day, so therefore there has to be a market for agricultural
produce. It is more that within this economic sector, especially in Italy, there
has been a lack of government regulation, which has led to an inevitable
culture of profit. It is not possible that a kilo of oranges or Pachino
tomatoes are brought from the producer at 7 cents and then end up in a
supermarket in the north of Italy for €3.50. It’s necessary to reflect on such
facts. On the other hand, I do not share the opinion that, just because there
is the crisis, people are no longer entitled to their rights. It is necessary
to look to the future in this country, which will be built of both Italian and
foreign citizens. We have to try to build a society which is based on
respecting the rights of all its citizens, regardless of their origins. The
future of the country depends on this.

You recently published a book entitled,
“Love your dream” which talks about what happened in Nardò. Can you
tell us what your dream is now?

-My dream was to arrive in Italy, in this
country which I fell in love with when I was young thanks to its great football
players who I followed and admired. I love the present. My dream is the
present. And I work to change
the present and to improve the future. A better present will undoubtedly lead
to a better future, a future which corresponds to our dreams. 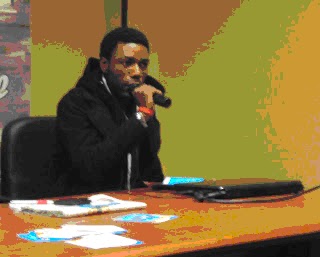 Published by Borderline
Sicilia at 16:31

The CARA of Mineo: The Ghetto Wanted by the Lega Closes Down after Eight Years

The European Court condemns Italy for its refusals of entry. But with the new Lybia will things really change?