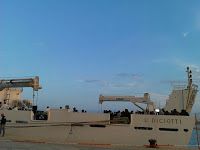 Migrants’ journey has not ended yet. Last week-end about 940 migrants
were rescued offshore Sicily, in eight different operations. 258 of them
arrived at Augusta’s port onboard of Belgian frigate Leopold Ist, in the
morning of Friday, november 7, within EUNAVFORMED mission. Newspapers already
write of the capture of 4 presumed smugglers, omitting the fate of all of the
other new arrived, supposedly shunted in the surrounding centres. Another 713
more migrants land from the Coast
Guard’s ship “Diciotti” at the port of Pozzallo, in the same Friday afternoon.

Expected by 2.o’clock p.m., landing started toward mid afternoon lasting
up to late evening, under the rain. On the quay, there where the Red Cross, the
Civil Protection, MsF, UNHCR, Save the
Children, Terres des Hommes and
Police in numbers. There were also some members of Frontex and Europol, by that
time active next to Italian Police. Among migrants, arriving from Ghana,
Nigeria, Senegal, Morocco, Somalia, Palestine, Mali, Eritrea, Sudan, Algeria
and Syria there are also 52 Minors. Towards such a number of refugees, concern
about their future accommodation and what they are going to face, is high: will
the individual protection they are entitled to by law be guaranteed to each of
them? Will the migrants be able to communicate, with the Police and the
operators waiting for them, in a comprehensible language, within the following
hours? Shall we be present at another fast and discriminating sorting between
economic and non-economic migrants? Where will Syrian and Eritrean people be
located, when destined to other countries? Large numbers frighten those who
know how easy it is for a migrant to become invisible amid them all. At this
moment the famous Hotspots, among them the Pozzallo CPSA*, should get up to
speed in short, but structural condition and internal set of rules, appear just
more confused than a few months ago.

On the port, a prompt transfer of about 300 new arrivals toward
Lombardia, Liguria and Toscana is taken into account: long travels that, in the
past, migrants had to face without any comfort, neither eating something easily
ashore, nor changing clothes after crossing the sea.

Other 270 migrants, instead, are attached to town’s CPSA*. The following
day we learn that at least 135 people are to be transferred from Pozzallo to
Messina’s Pala Nebiolo tent city, despite the water emergency impending for
days over the city. Being already alert on a guaranteed legal assistance, now
we fear a lack of basic rights such as safe and decent lodge, appropriate
medical and psychological assistance and non precarious sanitation, a fear
caused by the lack of structural requirements of several Sicilian centres,
among which Messinian tent city
altogether.

But, landing and transferring procedures go on with no variation and
buses take migrants quickly away from the sight of civil society. What is going
to happen during investigation and the different identification procedures will
be known the next days only, this time in the hope that each migrant had his
full right of verbalizing, besides knowing rights and duties he is entitled to,
in a so called democratic country, that sometimes does not look like that.